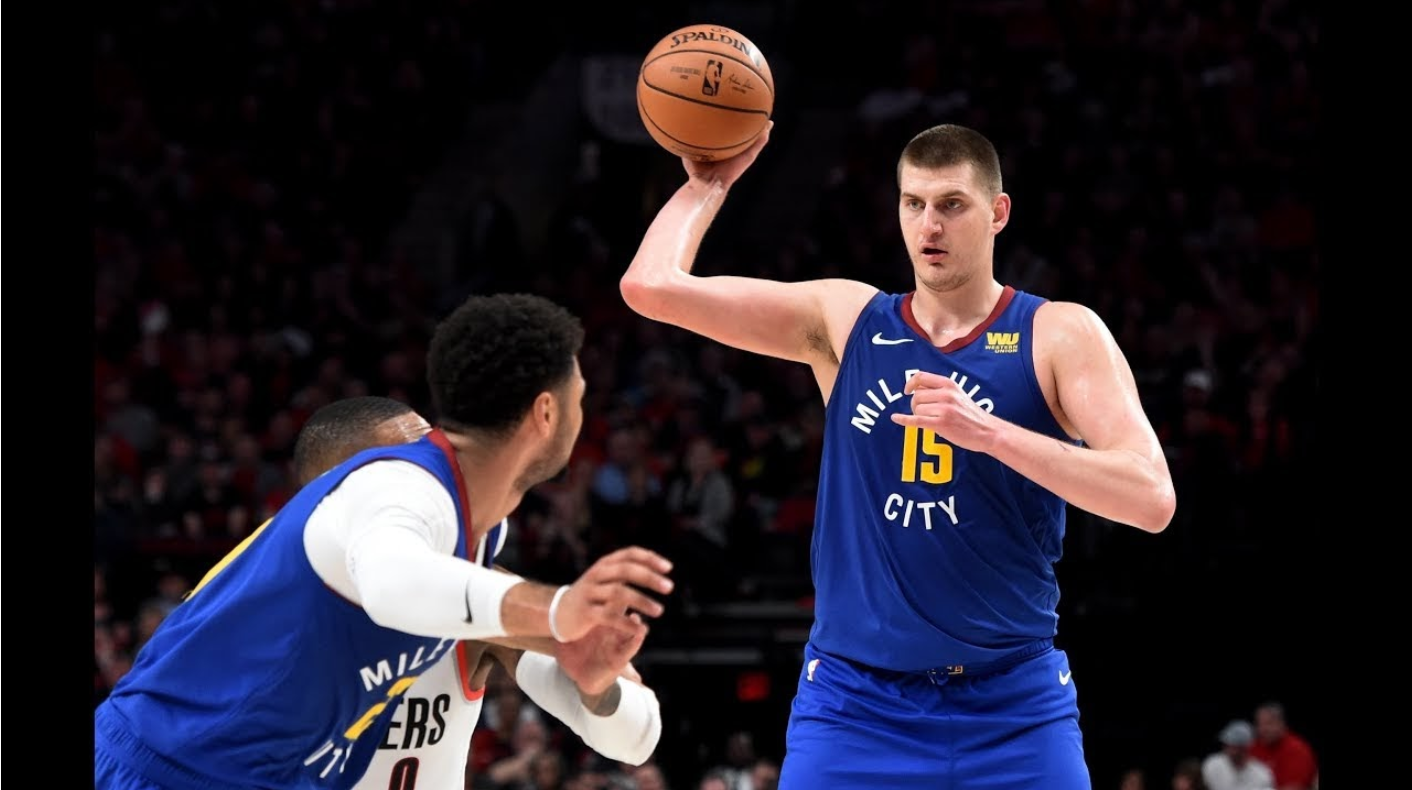 My obsession with Nikola Jokic’s historic season started with a fateful mistake: I had arrived to my fantasy basketball draft a minute late, and with the second overall pick I auto-drafted the Serbian big-man. I was devastated—for the past couple of weeks I did mock draft after mock draft, and had my sights set on Luka Doncic, who I thought was a MVP candidate heading into the season. I was ridiculed by the other team managers in my league. However, my so-called mistake bloomed into a front-runner MVP candidate that has carried my team to the fantasy playoffs. Glued to every Nuggets game like a bee to Big Honey, I was inspired to quantify Joker’s campaign thus far and how it stacks up against the all-time greats.

Everyday on Sports Center or House of Highlights, I see insane clips of impossible fadeaways, floaters, and dimes that Jokic puts up on a regular basis. Watching these highlights and Nuggets games, the two factors of Joker’s game that stand out are his impact and efficiency. It seems like every jumper swishes cleanly through the net, and on every possession the Serbian big man will have the ball: directing traffic, handing the ball off to Jamal Murray, and/or absolutely picking opposing defenses apart. The advanced metrics back up the prolific season Joker is having:

The progression of Jokic year-over-year is crystal-clear. In offensive box plus-minus, the center has taken a massive leap from 5.5 in the 2019-20 season to 9.1 this season. The same trend holds true for Joker’s shooting efficiency. In true shooting percentage (TS%), Jokic has gone from 60% to more than 64%. By regular NBA standards, Jokic was already an exceptional offensive player before the current season, but he’s entered an entirely different stratosphere now.

It’s not only the individual stats that are impressive, but the way Joker elevates the Nuggets offense to soaring levels. Compared to other superstars in the MVP conversation, Jokic’s offensive impact is dramatic. Without the big man on the floor, Denver’s offensive rating would be league-worst at 104, lower than the Oklahoma City Thunder and Orlando Magic. With the European floor general on the court, Denver’s offense automatically catapults to league-best, better than the Western Conference-leading Utah Jazz. 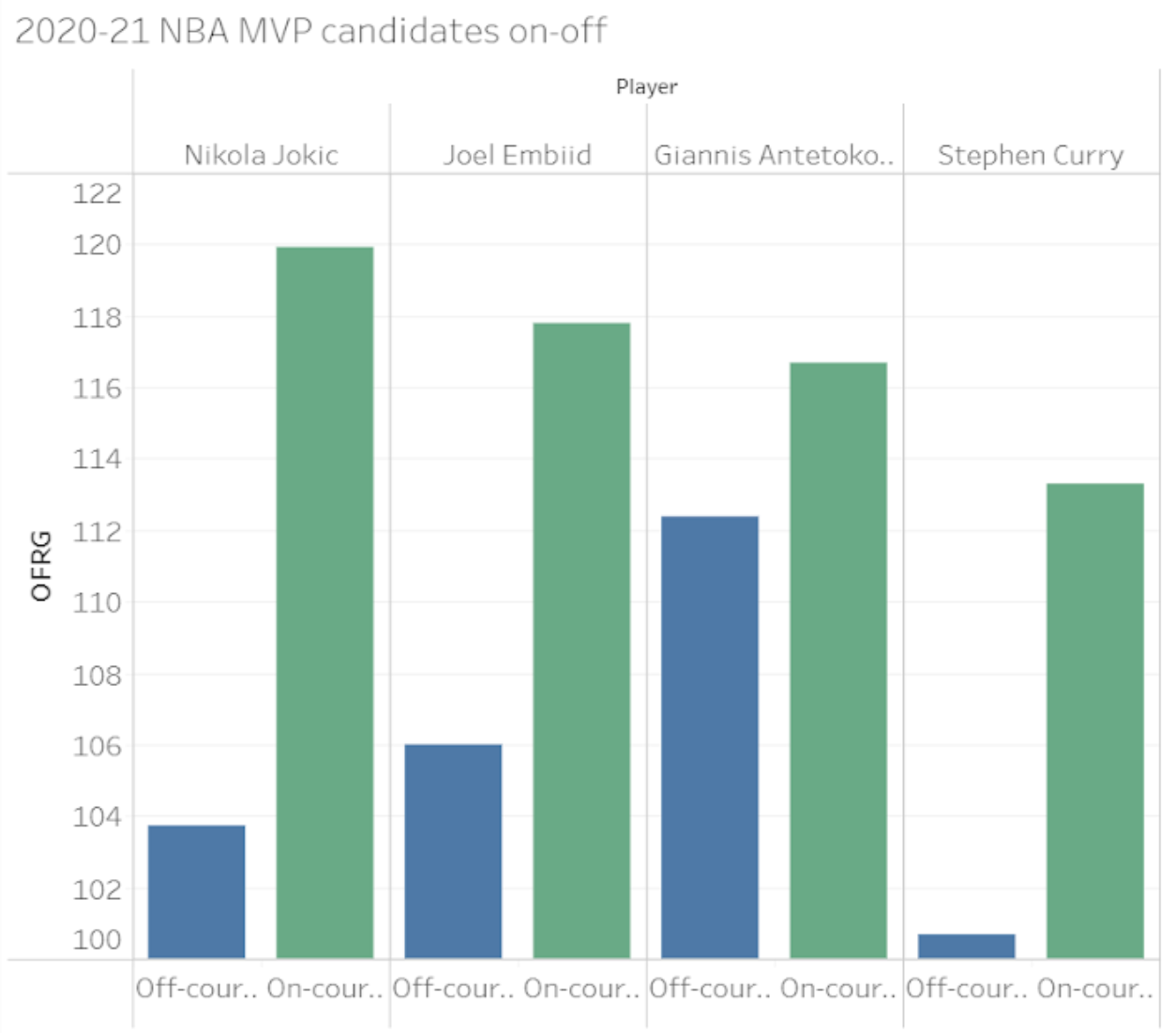 Even better, we can visualize Joker’s season stacked against all NBA players this season as of late February. There’s a positive correlation between win shares and box plus-minus for NBA players, which makes sense intuitively because players with more of an impact on their team will be credited for more wins. Player’s with neutral impact on their respective teams are located at the intersection of the x and y-axes. Nikola Jokic is the lone outlier, situated far outside the offensive prowess of even Damian Lillard or Anthony Davis. At the time of writing, Jokic has upped his numbers to a BPM of 11.7 and 14.5 total win shares, according to basketballreference.com. To contextualize these numbers with historical data up to the 2017-18 season, Joker’s campaign to-date would place him in the same realm as Lebron’s MVP seasons in Miami and Russell Westbrook’s run from 2015-17.

All this is happening under the umbrella of a shortened NBA season, with Denver facing its own fair share of challenges. Jamal Murray is now out for the season with an ACL injury, and critical players like Michael Porter Jr. and Paul Millsap have been in and out of the roster due to COVID protocols and injuries. In spite of this, Denver is only 5 games back from first place in the West, and still stringing together win after win in the absence of Murray. With more than a week left in the regular season, Joker will continue to shoulder the offensive load as the Nuggets look to make another deep playoff run.

As the maestro of the Denver offense, Joker’s effortless playstyle encapsulates the spirit of team basketball; he describes it succinctly himself: “A point makes you happy … An assist makes two people happy”. The scary fact for the rest of the league is that Joker still hasn’t hit his prime yet. At a youthful age of 26, he has years of growth and striking terror into opposing defenses left in him. Already the greatest passing big man of all time, he’s reinventing the center position and serves as another reminder of the current age of positionless basketball.

Facing the data and the highlight reel plays, it’s hard to argue that Jokic ISN’T the MVP this season. He’s currently the frontrunner in the race for the award, and I’m almost certain this will remain true when the annual NBA Awards show rolls around. That’s why, without a doubt in my mind, Nikola Jokic should be the 2020-21 NBA MVP.