I spent ten years of my life with my hair plastered in melted gelatin, my face painted with elaborate waterproof makeup, and a permanent headache from practicing the same eight counts for hours at a time. I was an artistic swimmer, and I have always felt incredibly thankful to see representation of my sport on the world’s biggest stage. After all, the Olympics is often the “once every four years” opportunity to showcase sports that are otherwise neglected by common sports culture. As a huge fan of the Olympics, particularly the Summer Olympics, I wanted to take a deeper dive into some of the intricate analytical relationships in the Games. More specifically, this article will analyze the effects the host country has on their athletes performance at the Olympics.

We’ve seen the concept of “home field advantage” persuade results of games in many sports, from football to baseball to basketball. I was interested if this same concept applies to the Olympics. After all, the qualification rules are different for the host country of the Games, so maybe this influences the ability for host country athletes to perform better? Let’s take a look. 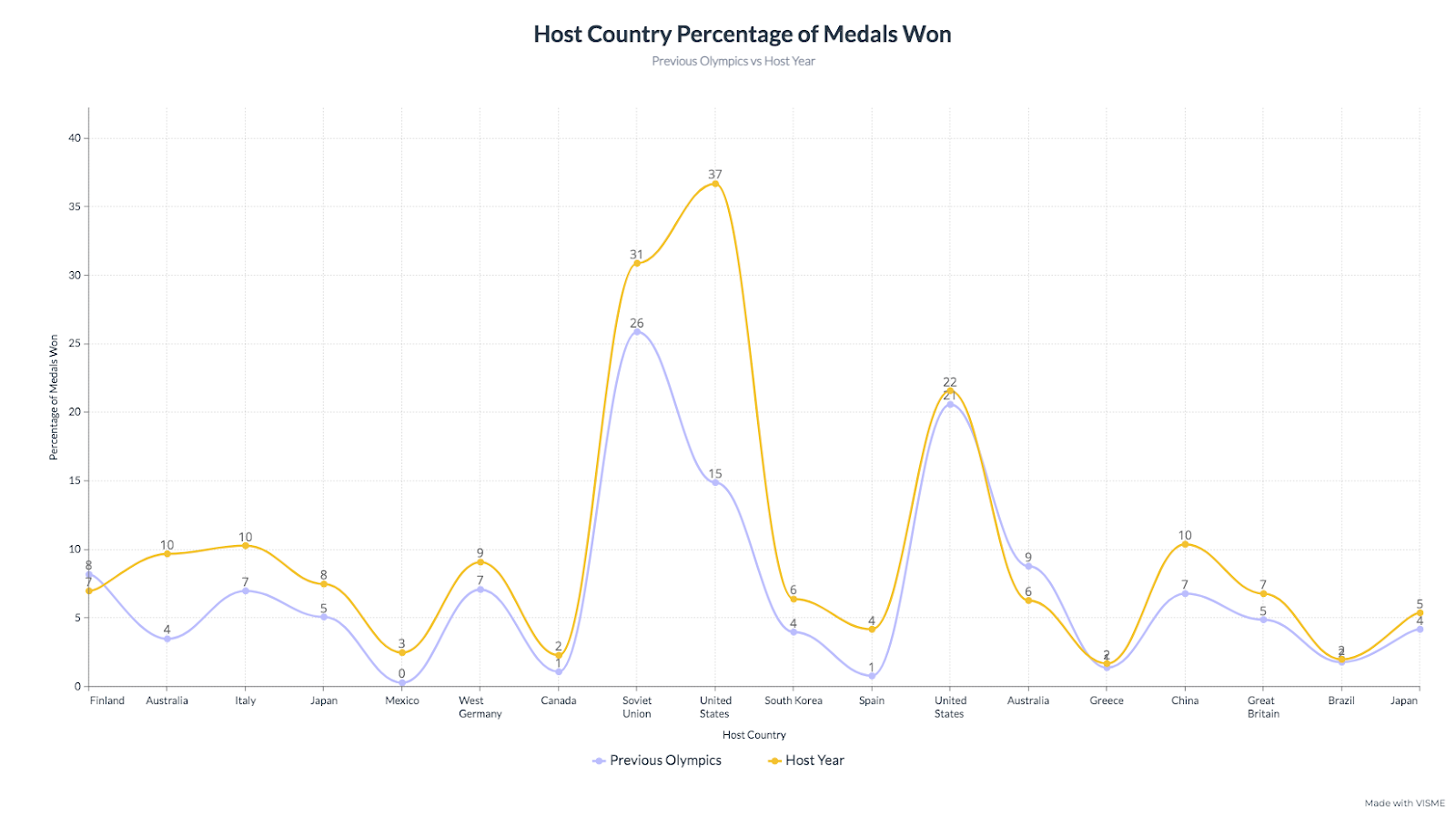 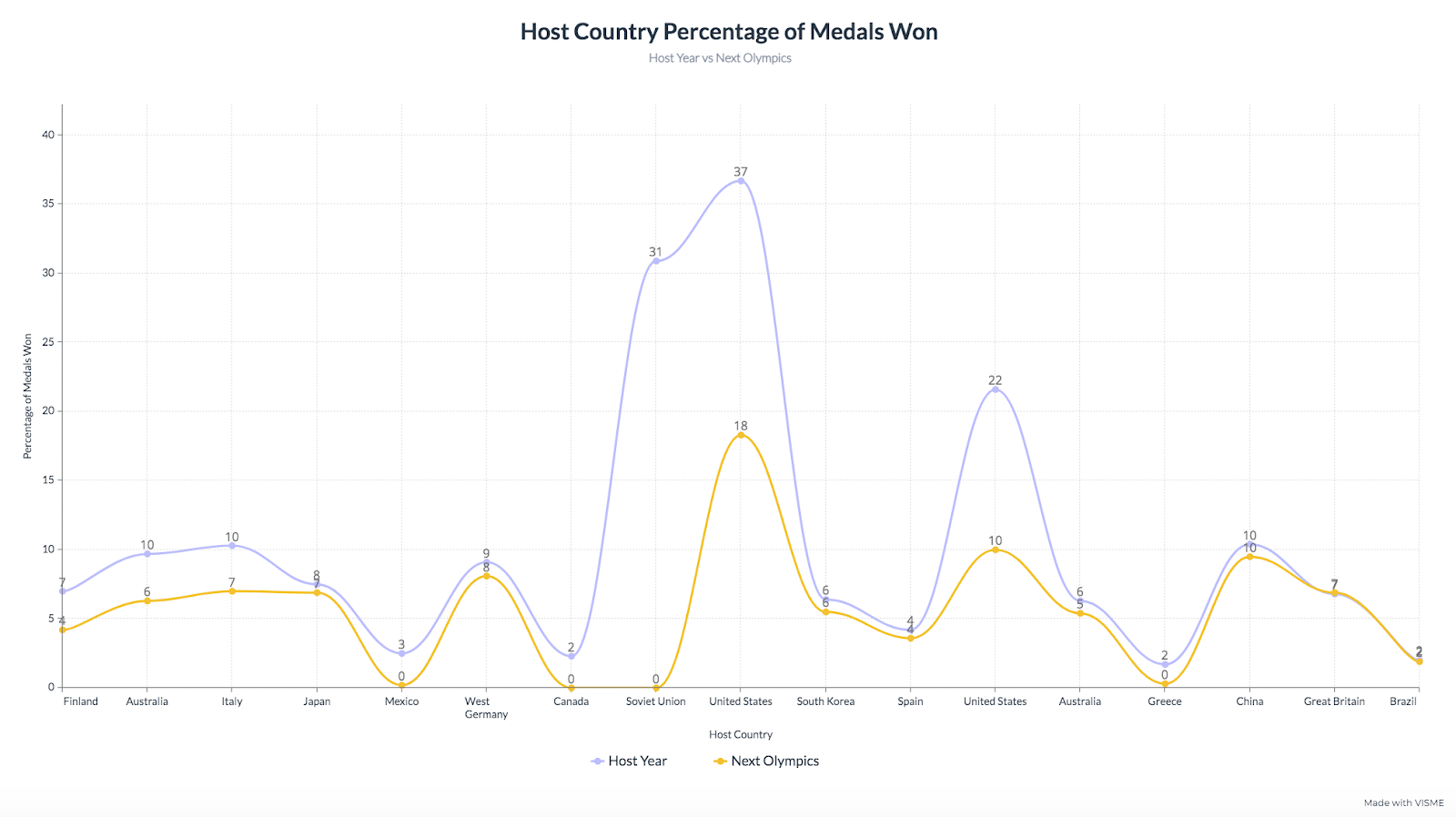 Let’s take a closer look at the United States’ performance over the last eighteen Olympic Games. The United States hosted the games in 1984 in Los Angeles and in 1996 in Atlanta. 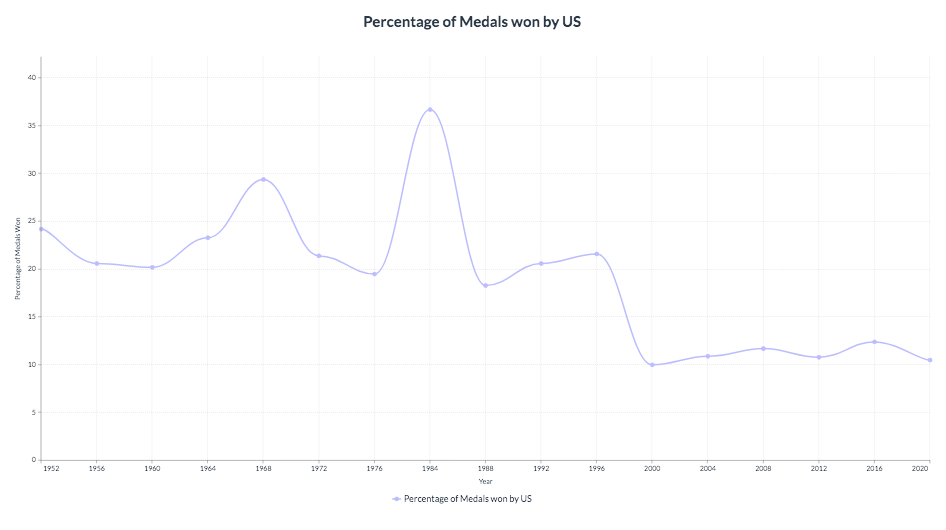 Omitting the fact that the United States boycotted the 1980 Olympics, the United States has consistently won between 10-40% of the medals available, hovering around 20% from 1952 to 1996 and dropping to around 12% from 2000 to 2020. However, within the respective averages of the two timeline groups, the spikes at the host years (1968 and 1984) are quite apparent. More specifically, the percentage of medals won by the United States increased by 188% from 1976 to 1984.

While it is important to note that we cannot determine hosting the Olympics as a cause to increased success in the Games, there can be many correlations drawn. The historical pattern of success for the host country could be due to increased resources or motivation, or due to different qualification guidelines, but one thing is true: the host country has been more successful in their host Games for generations.