Many sports often have athletes follow a career path of being pretty good, then reaching their absolute prime for a couple years, and then eventually falling off. In soccer, we’ve seen this as players burst out of nowhere and become one of the best players in the world for a couple years and then gradually fall off. However, as technology advances, we’ve seen athletes remain at a top level for longer and longer. A prime example of this are obviously the two goats, Messi and Ronaldo, who are still functioning at near their prime, even as they enter their late 30s, which has never been seen before. It seems like these players have been at their peak for nearly their entire career, which is not normal at all. Different positions have different types of careers, but nothing is more volatile than the careers of attacking players. Let’s dive into the careers of players, specifically attacking midfielders and attackers from the top 5 leagues (Premier League, La Liga, Serie A, Bundesliga, and Ligue 1) and discover if there is actually a peak in the life cycle of an attacking-minded soccer player.

There are many different factors that can be used as a determinant to accurately judge if a player is at his peak. Some of the most common stats that help us make this judgment include average match rating, season rating, team awards, and personal awards. I determined a career year by combining goals and assists, as well as factoring in season rating and awards to determine a final overall score for each year of a player’s career. 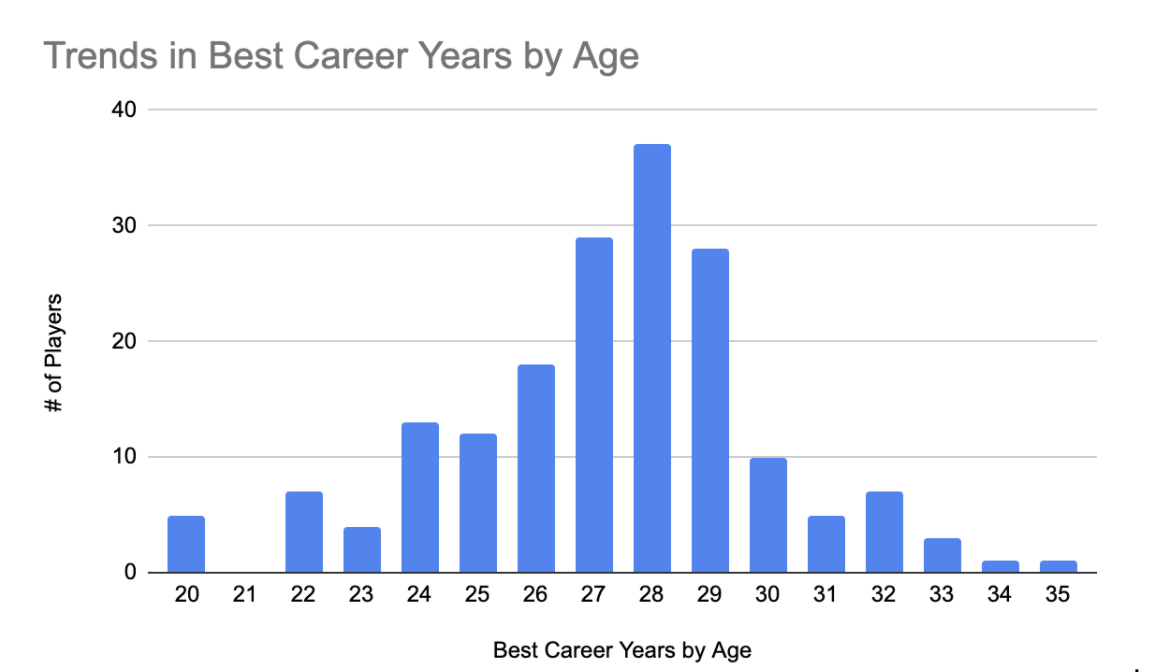 Here, in this chart, we can see that the best career years for a sample set of 60 soccer players (all older than 30) from the top 5 leagues is 28 years old, while an acceptable range for the best career years ranges from 26-29. This was gained from looking at the top 3 career years from each player that was researched. These years were considered the best years of these player’s careers. From this chart, we can see the effect that age has on these attackers, as not many players had notable career years after the age of 30. We also see the factor of youth and inexperience, as not many players had career years before 22 years old. However, there were a couple players that just defied the definition of having a peak. The biggest examples were obviously Cristiano Ronaldo and Lionel Messi, who have been consistently producing since their early 20s up to this day in their mid 30s.

GOATS: Out of this world?

Here, we see the careers of arguably the two greatest players of all time, Cristiano Ronaldo and Lionel Messi. Looking at their careers through attacking career contributions (goals + assists) shows us that both of these players have been producing at an incredibly high level for nearly their entire careers. Both players have been producing nearly 40 goals + assists for nearly their entire career, which is something that is just not normal. Both player’s careers show a similar buildup towards a peak around their mid to late 20s, portraying just another example of how an attacking minded soccer player reaches their peak level of production at this age range of between 26 and 29 years old. These 2 players are simply unreal.

As technologies improve, this age range will definitely expand, as players will be able to play for much longer as well as play in more games per season. I believe that this peak range will expand, but towards the older ages, as players will be able to last at their absolute best for longer. However, players will still need those early years in order to develop and gain critical experience in their early 20s. Knowing that this change might be coming up, it could be interesting to see how clubs change up their scouting strategies as well as how they structure their contracts. Many players sign 3-5 year-long contracts nowadays, but this could change in the future if clubs become more confident in putting their resources into long-term players. One thing I could see happening are clubs scouting for hidden gems in older age ranges, rather than just focusing on teenagers and younger players. If they are confident that these players will be able to perform for longer, and peak later than usual, it could excite them to buy them and bring them to their club as a long-term project.

As technology advances and players become more conscious of their bodies, we could see the landscape of the career of attacking minded soccer players completely change. We could see more and more players produce at the same level they do in their late 20s well into their late 30s. One thing to note is the bias from the sample that was taken, as only players that were good enough generally have longer careers. With many unfortunate injuries affecting very good players early on, such as Abdel Nouri forced out of the game at only 20 years old after giving signs of a promising career, it’s hard to determine accurately the career and future of a young player. Maybe another player like Messi and Ronaldo bursts into the scene and provides us with 20 years of stunning football. Who knows? We’ll have to wait and see.