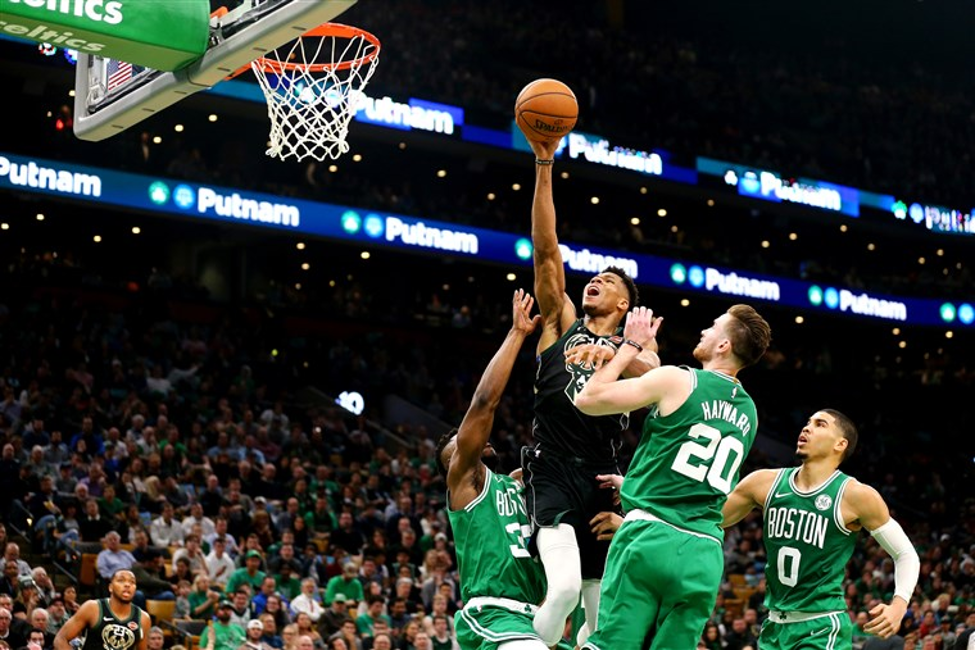 Over the last few decades, the sport of basketball has evolved as the increase in information and analytics have driven the game to be faster, more efficient, and more innovative. We witnessed the decline of the slow and isolation-heavy “hero-ball” model as teams began favoring faster paced systems with multiple points of offensive threats. However in this past year, the NBA has seen a noticeable shift in the amount of teams reutilizing the single star focused system but in a more efficient manner. This offensive philosophy, known as the “Heliocentric” offense, is a system where a single star handles the majority of their team's scoring and playmaking responsibilities. A statistic we can use to track heliocentricity is usage rate. We will use former NBA executive Ben Falk’s calculation of usage rate which varies from the traditional calculation by including assists and filtering out garbage time. We will loosely define a heliocentric team as one with a player averaging 35%+ usage. (Note that there isn’t a strict qualification for “Heliocentricity”) 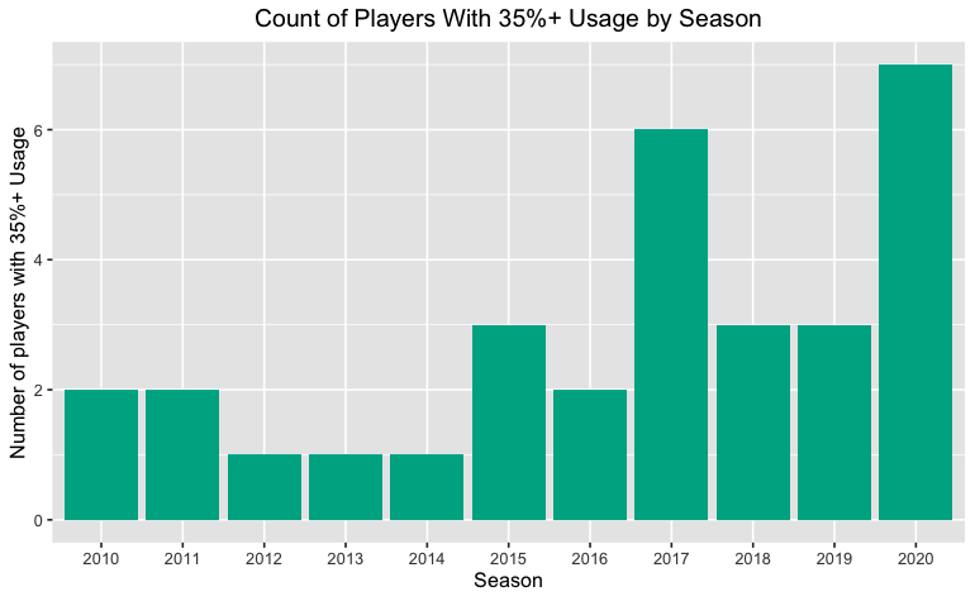 The visualization above shows the amount of players averaging 35%+ usage since 2010. The first half of the decade had relatively low counts as this timespan was dominated by pass-heavy offenses. Championship winners like the Lakers in 2010 and the Spurs in 2014 featured offensive systems that emphasized ball movement with multiple offensive threats. In 2017, we finally got a glimpse of the heliocentric prototypes that would lay the foundation for the offenses we see today. Russell Westbrook made history by attaining the highest ever single season usage rate (45.8%) and two years later, James Harden claimed the second spot in the history books with 43.9%. Despite this hero-ball esque style, the results proved to be quite efficient. In 2017 James Harden finished the regular season with the highest points produced per game (56.4) since 1973 and Russell Westbrook led the Thunder to 11th in points per game despite losing Kevin Durant. Although neither player was able to win a title with this style of play, the Houston Rockets were 27 straight missed 3’s and one Chris Paul hamstring away from a finals appearance, proving that there was some merit to the strategy. Rather than fitting a star player into a system, many teams are opting to make their star players the system instead. It’s similar to the hero-ball model of the early 2000s with a twist, these players are gifted and willing playmakers. Players like Luka Doncic and James Harden possess the same scoring abilities as players like Allen Iverson but the difference is that they’re actively looking to create opportunities for their teammates as well. By giving these players full control of the offense, they’re able to maximize their own offensive capabilities which can lead to easy scoring opportunities for them and their teammates.

Here’s an example of a typical Maverick possession. Thanks to a good screen, Doncic is able to find enough space to drive towards the basket. Three Jazz players collapse onto Doncic leaving Curry open for 3. There’s not much ball movement but there is a lot of off ball movement. This entire sequence took ~7 seconds and only required one pass.

In this example, watch how the Bucks surround Giannis. They spread the floor and give him the space he needs to operate. His interior gravity alone is able to draw 4 defenders towards him, resulting in an open 3 for Bledsoe. Once again, there’s a lot of spacing and off ball movement, but not much ball movement. These Heliocentric offenses are proven to be quite effective. Prior to the NBA restart, four of the top six ranked offensive teams used this style of play and this season’s Dallas Mavericks have achieved the all time NBA record for highest Offensive Rating (116.7) behind Luka Doncic’s 40.7% usage. 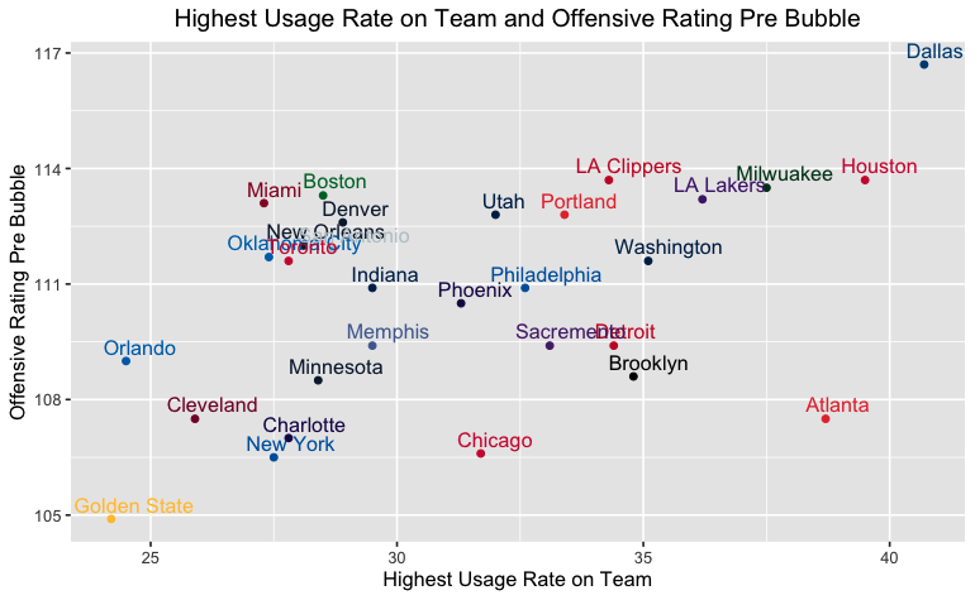 The visualization above shows the relationship between high usage and offensive rating. We see evidence of success with teams like the Mavericks, Rockets, Lakers, and Bucks topping the offensive charts. Even lackluster teams the Wizards are punching above their weight. The Wizards placed 23rd overall but their offensive rating was comparable to playoff teams like the Raptors and Thunder. Although it’s easy to conclude that these teams are successful because they have good players, like Lebron James, there’s enough evidence to conclude that these teams are doing well because they have good players AND because this style of play maximizes offensive efficiency. A great example of this is the Dallas Mavericks. The Mavericks finished 18th in offensive rating during the 2019 NBA season. This season, the Mavericks are statistically the best offensive team ever and this improvement can be explained by how they are utilizing Luka Doncic. He’s been given total control of the offense and his percentages have increased tremendously. Despite averaging only 1.4 more minutes compared to the season prior, his points have increased by 7.6 and his assists have increased by 2.8. He’s averaging four more shots a game but is shooting 3.6% higher. Doncic isn’t the only beneficiary of this style of play. He’s elevated the level of play of his teammates as well. 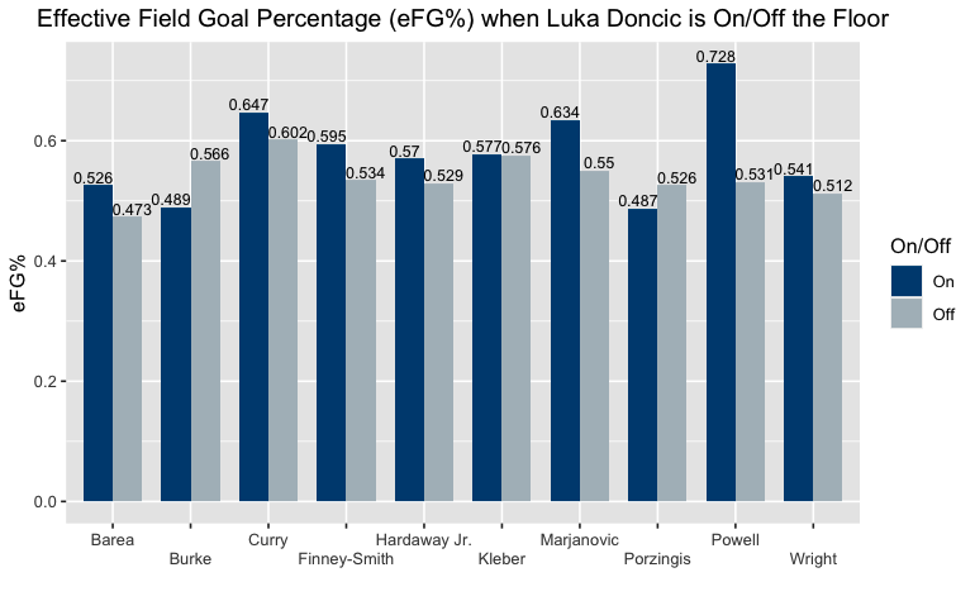 With only a few exceptions, the Dallas Mavericks tend to play better when Doncic is on the floor. They’re getting higher percentage shots and this is reflected through their effective field goal percentages. These trends are consistent throughout many of the heliocentric teams and there’s a high chance we’ll see more teams adopting this offensive philosophy. It’s important to note that heliocentrism doesn’t always guarantee success. After all, the Atlanta Hawks rank 26th in offensive rating despite Trae Young’s 38.7% usage, the third highest in the league. Alongside having a great playmaker, it’s important to have solid role players that can create their own offense when defenses start tightening up. This is one of the limitations of a heliocentric offense and many of the teams utilizing this style tend to fall off during the playoffs. We’ve seen evidence of this as this year’s Milwaukee Bucks collapsed when no player was able to step up in place of Giannis. With that being said, the 2020 Los Angeles Lakers are the first team this decade to win with a heliocentric offense and are the only team to win with a player averaging more than 33.2% usage. As this style of play continues to popularize and show evidence of success, heliocentric offenses may be the philosophy that defines the next era of basketball.