In the modern day of tennis, where analytics rules supreme, there still exist many traditions and euphemisms that are embraced by many professionals and coaches alike. In particular, a time-tested mantra endorsed by many is “when in doubt, hit to the backhand.” This is true, as generally players have stronger forehands due to the additional flexibility and strength associated with the dominant arm. Even players at the highest level tend to maximize the number of forehands they hit and use their backhand as a control shot to extend rallies. Strategies like these have been well-documented by arguably the most dominant group of tennis players – the Big Four (Andy Murray, Rafael Nadal, Roger Federer, and Novak Djokovic). The chart below displays the number of backhands to forehands for all charted matches of these four players: 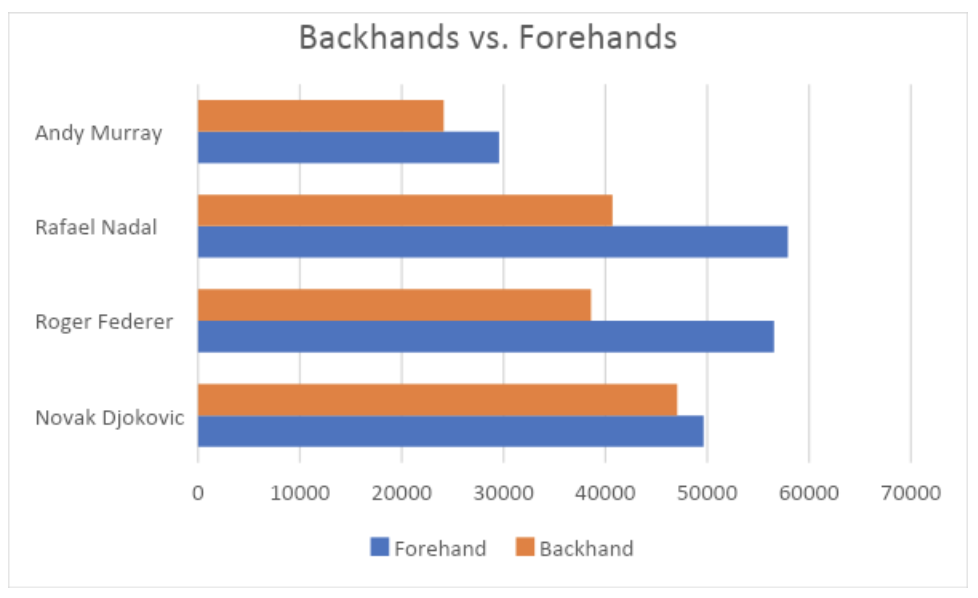 As evident by the data above, aggressively minded players with stronger forehands like Federer and Nadal have extreme deviations towards the forehand side. However, what is more surprising is that even players known for their backhands and defensive skills like Djokovic and Murray still hit thousands more forehands than backhands over an extended period of time, giving the mantra its merit. A common misconception is that defensive players are content hitting whatever shot they require, but the data displays that even those types of players are eager to run around backhands to avoid them.

Another reason that players tend to hit to the backhand revolves around the shot they get in return. A slice or chip shot is generally regarded as a weak, defensive reply, and a primary reason the backhand is so heavily targeted is due to the fact that slices – replete with underspin and slow backspin- are far more common in backhands than forehands. These shots are easier to attack, leading to a higher chance of success when they are received. The graph below illustrates the significant difference in the number of slices hit from the two sides of the court: 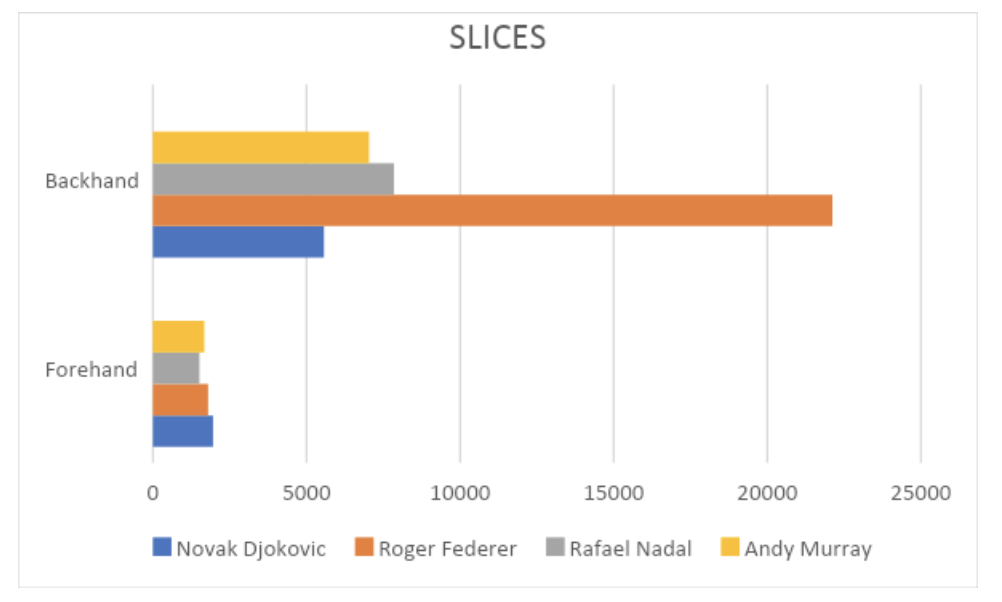 To cap it off, contrary to popular belief, the majority of rallies in tennis are under 5 shots – in fact, over half are under 3 shots long. Therefore, added importance is given to ending a point quickly rather than drawing it out, and players are repeatedly instructed not to allow their opponents chances to take control and seize matters into their owns hands. This leads to players avoiding the other players’ forehands for these reasons, and the charts below depict the winners hit per side of the court as well as how frequently the point ends: 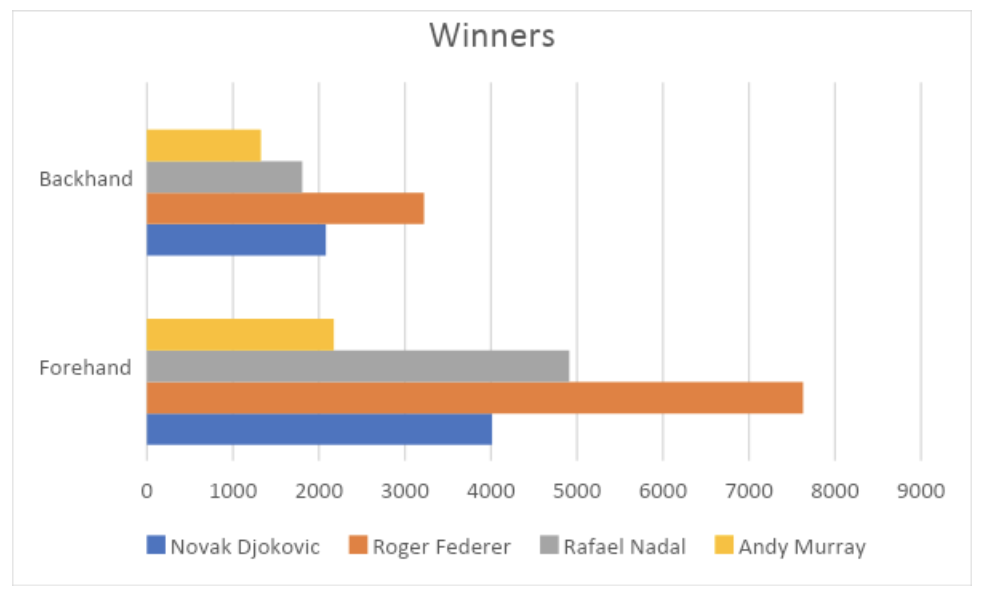 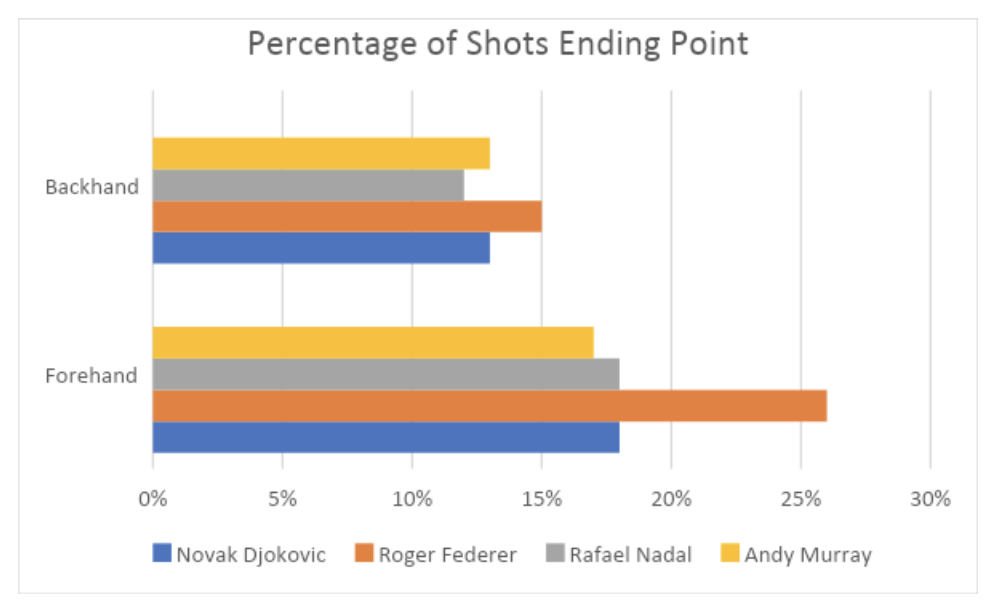 Although it appears clear that hitting to the backhand in rallies returns dividends, there is one key variable to this – the serve. Looking at the Big Four’s statistics, it is clear that there are exceptions and trends illustrated by the graph below:

With the exception of Rafael Nadal due to his lefty nature, the other three players had slight tendencies to the wide sides in their serves in both the deuce and ad courts, with almost even percentages. This suggests that although hitting to the backhand is important, an element that is often overlooked is variability, preventing an opposing player from guessing the serve spots ahead of time and having ample time to prepare. Serving to the backhand – while clearly important to Nadal and his lefty spin, is not necessarily the best method for winning points, as demonstrated by the most successful players of their generation.

Analyzing the data, two conclusions become extremely clear: hitting to the backhand is an effective tactic in the rally game, while variability on the serve is arguably more important than exclusively targeting someone’s backhand. Different situations obviously require different tactics and strategies, especially in the rare case where someone’s backhand is clearly stronger than someone’s forehand. However, after evaluating the most dominant players of this century, one thing becomes clear – when in doubt, hit to the backhand.